The labourers of the digital turn come in 3 main forms: elite, full-time workers in the digital sector; platform and freelance workers in the gig economy; users exploited for their data and creative content. There is no consistency across these categories in terms of product, processes, and tools. These are very different categories of work involving incomes that span the spectrum from the absent to the stratospheric. Workers in each group toil under different kinds of contracts and with different kinds of management systems providing varying degrees of direct intervention.

What they have in common is precarity; the stability of instability. All categories of workers experience uncertain incomes whether through the requirements to undertake unpaid work, the vagaries of algorithms and consumer attention, the risk of salary being tied to a successful IPO, or the risks inherent of working in a sector which privileges growth over revenue. Job security is fixed to the shifting sands of corporate fit, user ratings, algorithmic and policy changes and self-sacrifice.

Unstable and unfixed, digital labour can best be described as cheap. I don’t mean that it does not cost a great deal – although that is often part of it – but that it is disposable and treated with contempt. The refusal to provide adequate income, institutional supports, career stability, and/or future pathways within digital labour environments articulates a view of workers and their labour, even elite workers, as something to be exploited but not celebrated or valued. Like throwaway consumer goods, cheap labour is readily discarded and replaced with little thought for the human who stands behind it. Even in the world of internet celebrity or star brogrammers, the dignity of work is cheapened when its exploitation leads to chronic instabilities.

Cheap work has a particularly gendered and racialised history. In Asians Wear Clothes on the Internet (2015) Minh-Ha T. Pham describes how the exploitative conditions experienced by the predominantly Asian style bloggers of her study “resurrects the spectre of Asian’s historical role in capitalism and, more specifically, in the fashion industry as unskilled, cheap labour” (2015, p.189). From the association of poorly manufactured trivial goods with the Made in China or Taiwan stamp to the denigration of “Chinese gold-farmers” in games, “Asian labour” has a long history of being synonymous with degraded work conditions, trivial and poorly manufactured products, and low pay. Growing up in the US, artist and coder Xiaowei Wang describes their relationship to this sentiment in Blockchain Chicken Farm (2020):

“Made in China became seared into my psyche as a symbol of corruptness. The phrase meant something shoddily crafted, made by people who were mindless drones in a factory bent on gaining profit by cheating foreigners out of an extra cent or two….[cheap products] reflected the laziness of the Chinese, who were unwilling to be diligent about work and always wanted to cut corners.”

To treat digital labour as cheap forces an intersection with this racialised history. It also serves to feminise such work. As Pham reminds us, the stereotype of the docile Asian worker is encoded as feminine and this is mobilised to associate Asian women and men with feminised labour markets such as cleaning, cooking, and laundry workers. The connection to domestic labour – which under contemporary capitalism is considered ‘women’s work’ – is important. Women’s labour has long been associated with lower wages, casualisation, fragmented labour experiences, namely as precarious, unstable work which is the first to be discarded in times of economic crisis such as the current Covid pandemic.

Like the racialised labour of Asian workers, women’s work both in and outside the home has historically been separated out from legitimate, valuable productive labour and devalued accordingly. Such divisions between forms of labour – whether the work is deemed productive or unproductive; valuable or cheap – are vital to the functioning of capitalism. Not only does this demarcation allow the reduction of production costs by lowering wages allowing more effective exploitation of workers, it is vital to creating an industrial reserve army of unemployed or under-employed workers who generate competition for employment and drive down wages. The racial and gendered division of labour is not an accident of geographic conditions or solely an expression of racism or patriarchal logics. It is the entwining of these dynamics with economics in a mutually reinforcing relationship.

It is fairly uncontentious to label user labour, platform work, and freelance content creation work as cheap. The entire economic logic for its use is predicated on its relative cheapness to other forms of value creation. It is more difficult to place full-time, elite Silicon Valley work into the racialised and gendered category of cheap labour, particularly with its persistently white, middle-class, and masculine nature and its socially privileged status. Nevertheless, the financialisation of the sector and the emphasis on share price devalues the importance of workers to the sector and its economy. Digital labour can be well-paid and socially valorised but still be treated as disposable, to be rejected, and discarded as share prices wax and wane. At the mercy of venture capitalists’ whims, the vagaries of share markets, and exposed to the risks of entrepreneurialism, the labour of  Silicon Valley’s white dudebros tends toward cheap.

But this intersection also raises troubling questions. What does it mean when marginalised work is performed by the most privileged of white male workers? What does it mean when cheap labour gains in prestige? As the centre shifts to the point of intersection occupied by marginalised workers, what other entanglements are mobilised to continue their oppression? What does the whitening of cheap labour do to those who have historically worked in this way?

To mangle some Spivak, what does it mean when the subaltern labourer not only speaks, but does a Ted Talk? 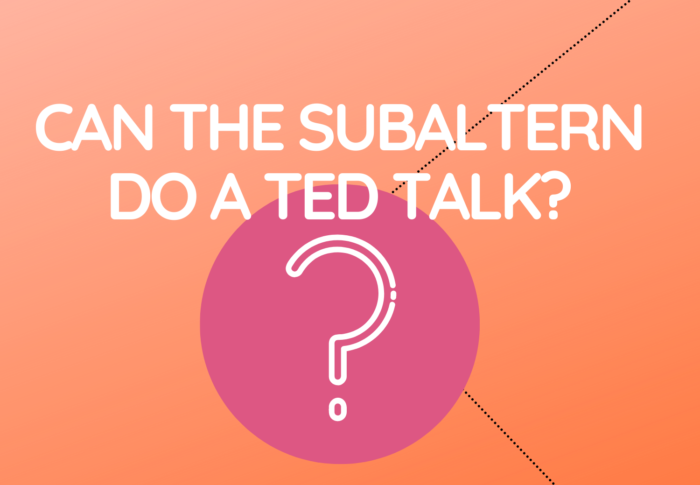